Welcome to another installment of World-Building Wonders! Find an escape into an author’s awesome world — and worldview! Today’s featured author is Heather Elliot.

In 10th grade, I wrote three 90+ page novels and two 60+ page shorter stories, all of them set during World War Two. I learned several things from that experience:

I have been researching, outlining, writing and rewriting my current novel for the last five years. Halfway through the rough draft I figured out who the titular character would be. Rewrite #3 saw my two warring kingdoms named. Rewrite #4 (or is it #5 now?) was 20,000+ words in before I solidified the real-world influences for the primary cultures.

The plot sprung from the mental image of a girl on a horse finding and saving the life of an injured man on a forested mountain. From there, I determined the terrain and primary kingdoms, established a time line of kings and wars, and eventually settled upon the political turmoil the plot is set against. I knew it would end in a war but the hows and whys remained elusive for an embarrassingly long period of time.

Where there is war, there is some form of military.

The kingdom known informally as the Valley is influenced by Vikings and medieval Russia. I will say right now, there are no horned helmets or excessive use of fur.

They were the easiest army to develop, with clans held loosely together by a regional government who in turn answered to the king. They provide one of the largest export of grain and textiles to the known world, and live content in their own ancient traditions, remaining loyal to king and country in the face of political pressures.

Their hostile neighbor Laylamore was a different story. It was a younger, aggressive kingdom, bristling with industry and foreign commerce, rich in natural ore and stone. My brainstorming kept circling back to Ancient Rome and the sheer efficiency/intimidation of their military. I decided to roll with it and modeled Laylamore’s army after the Roman Legion.

I had to do something to erase images of Hollywood Romans and Vikings, so I picked apart my third major inspiration to give my uniforms an unexpected twist. Enter the Napoleonic wars. I love the look of the uniform. I mean, isn’t it dashing?

I kept Laylamore’s military structure the same as the Roman Legion. The way men enlisted, trained, fought, served, and were discharged stayed pretty much the same. Primary weapons were daggers, short swords, arrows, spears, and they had basic armor-on-leather protection. Titles and specialty occupations within the army didn’t change much, nor did their functions and contributions to society. Legionaries built much of the infrastructure of the regions they traveled through, and all roads truly did lead to Rome.

I was all about the Roman Legion but it was just too Roman for the flavor of my novel. Something needed to give. After I found the picture of Handsome Man in White, I was completely sold on the Napoleonic uniform…except for the musket. That had to go, along with the pompom on the hat and strange fur object attached to the kit. I gave him a spear and a full Roman shield, with a quiver of arrows at his feet, and it was the perfect image. Sharp, professional, and intimidating.

Of course, I can’t draw even a stick person so I have no way of showing how amazing it looks in my head. People can only trust that my Roman-Legion-Viking-Napoleonic-War conglomeration will turn out better than it sounds. I’ve yet to determine the exact uniform colors; shield, banner and crest designs; surnames for pretty much everyone; and if the missing characters are ever found.

It’s all in the details.

Heather M. Elliott lives in Upstate New York with a phonograph player, sewing machine, and an impressive amount of books. She is an avid reader and history fanatic who has been caught slipping subtle and obvious trivia into her writing. Outside of her two part-time day jobs, she is a radio drama scriptwriter and is currently working on her first novel, a two-book series tentatively named The Dirk of Shan and The Fourth Prince.
She blogs at GreenPen Productions: Adventures in Creative Writing 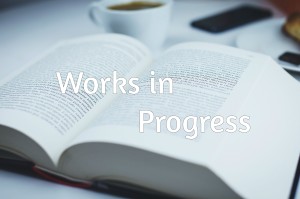 Book 1: A young woman’s world collapses as political turmoil brings her country to the brink of war, forcing her to choose between finding the family torn away from her or accepting the family she never knew existed.

Book 2: Someone seems to think she knows the identity of the fourth prince, whom legend says will restore peace, dragging her into a desperate power struggle to gain the kingdom for their own.